The time has finally come for me to make my announcement! I will be hitting the road again in a few months! I have completely redone the blog with all new information regarding my upcoming journey. I'm gonna be embarking on the biggest bike ride of my life. I will be starting a bike ride that is going to take me all the way around the world. Yep that's right, around the world on two wheels. I'll be starting out in the USA and pedaling through The Amazon jungle, the Sahara desert, the Himalayan mountains, and the Australian outback. This is gonna be one crazy ride!!! 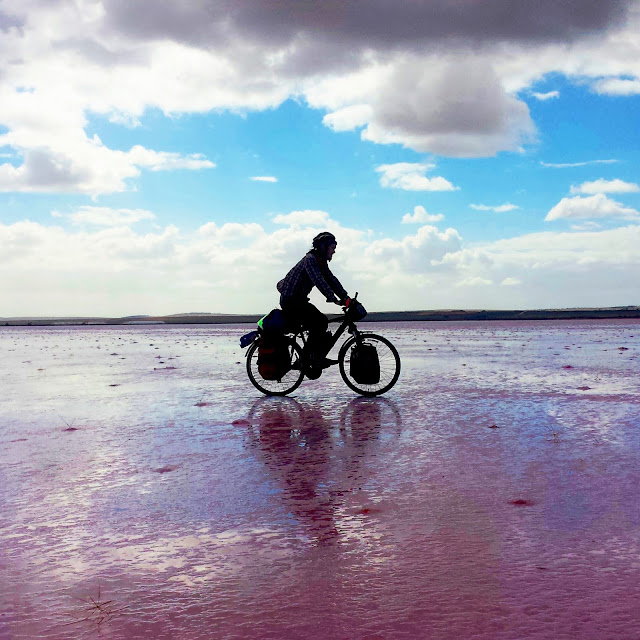 I will be posting updates to this blog as well as to my social media accounts. If you're interested in following along with the journey check them out!!

A Brass Fork in the Road


Wow, it has been a long time. I'm still alive and well. I just haven't done much bike riding lately. Alright, I will try to get you guys up to date on my misadventure.


So just before I made it to Lima I noticed that the rim of my front wheel had split. I was at around 15,000 feet in Cerro de Pasco, the highest city in the world. The air was thin and there wasn't a bike shop in sight. The closest big city at this point was Lima. So with the help of a few zip ties I bandaged up the wheel and continued riding. In the back of my head I was thinking, "It's only a few more days to Lima. I'll make it!" Well every few hours the crack on the rim got longer and longer. I just added a few more trusty zip ties and soldiered on. This quick fix worked for a while, but soon the metal split apart so far that the sharp edges of rim rubbed through the tube and flattened my tire.


No rim, no tube, no bueno. Since there weren't any bike shops in the mountains and I didn't have a welding machine with me. I decided to hitch a ride. It took nearly three hours with my thumb held high before I got a ride. A group of citrus pickers in a large truck picked me up and took me to Huaral. A neighboring city to Lima. From there I grabbed a bus to Lima confident that I could repair my bike there. Not only was the rim broken and the tube punctured, but the three hour walk attempting to get a ride had slowly destroyed my tire. The brakes I believe were the culprit for the damaged rim. They were terribly worn and created a metal on metal connection with the rim. More often than not I had to use my foot to manually shift gears. I was literally coming into town to the rims. My bike was in shambles.


Once in Lima I went to the Giant Bicycle factory. They had agreed to sponsor all the repairs for me free of charge. That sounded like a pretty good deal. They quoted that to order the parts and repair the bike it would take 7-10 days. No big deal, I could do with a little siesta. Now I just get to enjoy the city for a few days.


My first day in Lima I was out out the town when I met a young Peruvian girl named Claudia working in a cafe. We started talking and got along right away. We met again the next day and started seeing each other. Before I knew it those 10 days in Lima had flown by. I inquired about the bike, but this is Peru, and there are always delays. The repairs weren't finished yet. I wasn't in too much of a hurry to move on so I just let them take their time repairing the bike.

I continued exploring the city. As I walked along the coast of Miraflores (A rich suburb of Lima) I saw many tourists parachuting off the cliffs towards the sea. Claudia's birthday was approaching and I couldn't resist the parachute. I decided we should do that for her birthday. The wind wasn't very strong that day, but eventually it picked up and we could go. We each had our life strapped on to a professional diver. My parachutist ran towards the cliff and we jumped off. We swooped down towards the water the quickly changed directions as we gained altitude. Soon we were sailing above the tallest skyscrapers in Lima. Using only the power of the wind. It was the best kind of birthday present, one I got to enjoy as well.

What was Tormod up to you might ask? Well he had also met a Peruvian girl Tirsa a few days after I met Claudia and those two began seeing eachother. Since my bike was in the shop still and we had some free time Tormod and I came up with a plan. The four of us would take a road trip to Cusco to see Machu Picchu, Peru's most famous landmark and one of the 7 wonders of the world.


After three days in the car we arrived in Cusco. Machu Picchu was fantastic. It exceeded all my expectations. I didn't expect much more than a over crowded tourist trap. It was far from that. While there were many people there touring around, the park is massive with many hiking trails and opportunities to get away from the crowds if you want. And the views in that place are stunning.

Again time was flying, before I knew it we had spent a week in Cusco already. Claudia and I decided to continue traveling together for a while longer. Tirsa had things to attend to in Lima so she and Tormod flew back. Claudia and I traveled to the bottom of Peru and hopped into Bolivia. We hiked rainbow mountain, sailed Lake Titicaca, cabled above the city in La Paz, and had some fun at the beach. Then we turned around and headed back north on a collection of different buses. 10 hours on a bus, hopefully you're tired.

We're now back in Lima. And after more than two months in the shop my bike is still not fixed. After 7 months here and with a dwindling bank account I needed to make a tough decision. I'm still not sure my exact plans, but due to a lack of money, homesickness, and the coming winter in the Southern Hemisphere. I will be postponing the rest of my bicycle trip. Not to mention my bike is still incomplete. I will be returning home for the summer to save up some money, play a bit of volleyball, and catching up with friends and family. Then I'll fly back to South America and complete the last portion of the ride.

It was a tough decision to make, but I decided rather than hurry through the last few months in Chile and Argentina and freeze up in the Andes. I might as well just wait until the weather is nice and I have the funds to ride at the leisurely pace I enjoy.

I'm chilling in Lima for a bit longer with Claudia before we fly to Brazil, the last stop before home. After that I'll be back in the USA. Maybe with a bit of convincing I'll be able to persuade Claudia to continue the bike ride with me when I return. Who knows?


Thanks for reading my stories everybody. It's halftime now. This concludes the first portion of the South American bike ride. Spanish was learned, friends were made, and tons of unforgettable memories were scribbled into my brain. Can't wait to be back in the USA to see those of you that are American!